Report: U.S. Students’ Future in the STEM Workforce at Risk As alarmist as the term “STEM Crisis” may sound, it’s the best phrase that can be used to describe declining U.S. student achievement in science, technology, engineering, and mathematics (STEM) subjects today. Talent shortfalls in these areas threaten future American leadership in related job fields — not the least of which being space exploration and associated industries.

Perhaps you’ve heard mutterings about low achievement in these subjects before, but the recently released The Space Report, Quarter 3 seems to indicate it’s not hyperbole, with data demonstrating that as American students advance through their educational careers, their STEM proficiency declines. In fact, the report found that in the U.S., one-third of 12th graders are not considered “proficient” at a basic level in either mathematics or science.

Especially concerning is the fact that globally, American students can only claim a baseline proficiency in scientific literacy, and worse yet, cannot even claim to have the same baseline proficiency in mathematics literacy. Clearly, there is a gap in STEM education in the U.S. that needs to be filled. It is possibly exacerbated by a general disinterest in STEM subjects among students.

STEM skills are at the core of the space community’s workforce — from the mathematicians and astronomers who calculate what is happening in space, to the engineers who build the launch vehicles that allow us to access it. The STEM workforce has traditionally been sustained by an education system that starts in primary school and continues through postsecondary education. While this status quo approach has worked in the past, recent statistics seem to indicate that without a course correction, today’s American students are unlikely to occupy a significant part of the STEM workforce in the future.

On the global stage, the picture for U.S. students becomes even more grim. The Programme for International Student Assessment (PISA) conducted a survey by the Organisation for Economic Co-operation and Development (OECD) of 15-year-olds around the globe. The 2015 survey included over half a million students in 72 participating countries, which created a baseline of STEM proficiency on a global scale, with baseline proficiency set at Level 3.

Although the U.S. performed three points above the global average in the global PISA ranking for science, it only achieved Level 3 proficiency on average, landing in 25th place globally. The U.S. PISA score in mathematics was even less impressive, falling 20 points below the global average and landing American students at 40th place with (below-baseline) Level 2 proficiency on average. Asia outperformed all other continents, containing three of the top five nations in science proficiency, and all of the top five nations in mathematics proficiency. 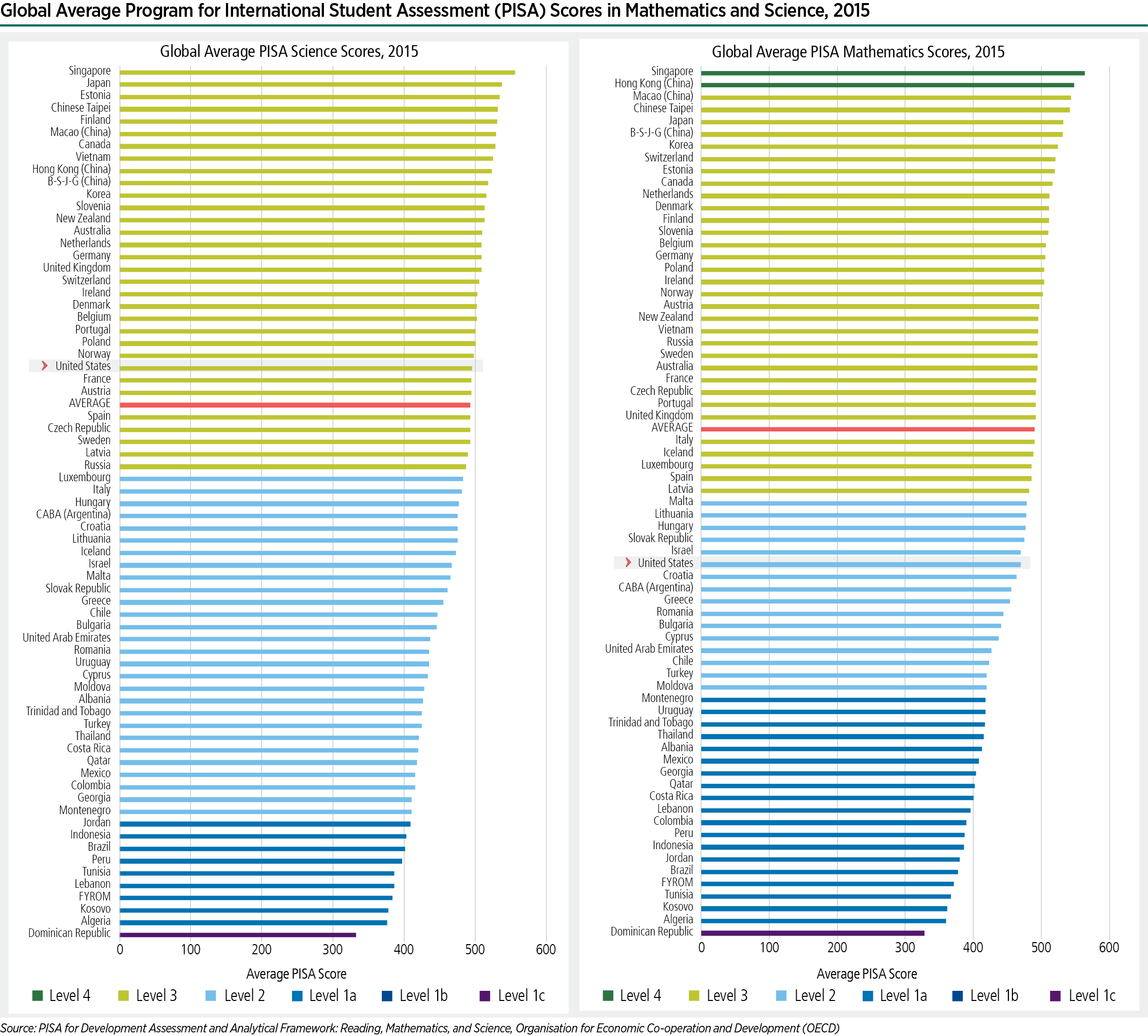 Statistics from 2016 indicate that these same shortfalls progressed into colleges in the United States that year, where only 6% of all the STEM degrees earned globally were awarded, and where STEM majors only comprised 18% of all bachelor’s degrees awarded.

Globally, the U.S. STEM college graduation rate per capita fell 58% below Iran, 55% below Russia, and 48% below China. The statistics are even more concerning when you consider that those same nations have their own space programs, some of which compete directly with the U.S. space program, and whose pursuits and goals in space do not necessarily align with those of the U.S. space program.

The importance of better education in the U.S. to develop the STEM workforce of the future cannot be understated. All of these reports indicate that more access to special programs that increase students’ interest in STEM subjects from the earliest ages and beyond are needed.

Thanks to the generosity of donor contributions, the Space Foundation is creating and leading a number of efforts to counteract these trends. The primary goal of these efforts is very simple: To instill and maintain lifelong STEM engagement in students, beginning in prekindergarten. Rather than having students simply sit in classroom lectures or read textbooks, the Space Foundation is committed to giving them hands-on, multisensory experiences that allow them to see STEM subjects come to life, and then learn to apply them to real-world situations. These programs employ unique curricula programming, outreach, and cutting-edge technologies to provide an immersive experience.

For example, school field trips to the Space Foundation Discovery Center in Colorado Springs, Colo., include a giant Mars map that has an accompanying augmented reality component allowing students to walk to a location on the map, and then use iPads to “explore” that area of Mars using real data gathered by NASA’s Mars Curiosity Rover. In the Space Foundation’s Mars Robotics Laboratory, students can navigate a simulated Martian environment with radio-controlled rovers they operate themselves.

Developed by the National Oceanic and Atmospheric Administration (NOAA), the Discovery Center’s Science On a Sphere® is a striking piece of technology, and customized datasets created and programmed by Space Foundation educators provide unique content to further enrich students’ experiences with this dynamic feature.

The Space Foundation’s Audience with an Astronaut events give children and their families first-hand access, either in-person or virtually, to an actual astronaut so they can be inspired by real experiences in space. The astronauts who lead these presentations are selected because they’re relatable to young audiences, making space less intimidating and more accessible. The core message delivered at these events is that students can and should believe that they too can pursue STEM careers and reach for the stars. 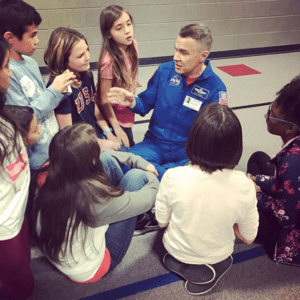 The Space in the Community program takes the Audience with an Astronaut approach a step further — into schools in communities nationwide, extending the Space Foundation’s outreach to tens of thousands of more students. These events also provide teachers with professional development sessions, where they receive training, innovative lesson plans, and activities they can bring back to their classrooms to inspire greater STEM achievement from their students.

The Space Foundation’s Teacher Liaison program provides a support system for teachers, by not only giving them access to training and curriculum, but also the opportunity to network, collaborate, and exchange ideas with their peers nationwide. Chosen through an independently assessed application process, these educators are the country’s “best of the best,” and as of this writing there are 248 teachers in the Teacher Liaison program from 36 states across the U.S., and around the world. 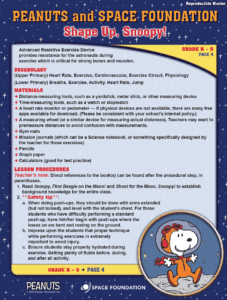 This year, the Space Foundation’s education department partnered with Peanuts to create STEM lesson plans featuring the timeless character Snoopy, incorporating STEM exercises that assist America’s favorite beagle as he embarks on his boldest adventure yet — going to space. Ten lesson plans have been made available as free downloads for teachers to use in their classrooms that make STEM learning more fun and accessible to students.

All of the aforementioned efforts are just a snapshot of all that there is for students and teachers from around the world to gain from the Space Foundation’s educational mission. By bringing space down to Earth, making it accessible to students of all ages, and generating a genuine excitement about the value of STEM subjects, the Space Foundation is contributing to building a culture of lifelong learning and opportunity for all.

Because of the multitude of technological advances made in the pursuit of space, today every citizen, community, and continent are connected like never before. The successes achieved in that pursuit would never have been possible without the investments made in education, talent, and resources. That is why the Space Foundation, with the support of generous donors, is committed to building STEM programming and strategies that instill a lifelong passion for learning and help today’s students contribute to the STEM workforce of tomorrow. Learn how you can make a difference in these efforts here.