Friday, Oct. 4, marked the beginning of World Space Week, a global celebration of space activity. Twenty years ago, the United Nations declared that World Space Week be celebrated Oct. 4 through 10 each year, commemorating the date of the Sputnik launch (Oct. 4) and the signing of the Outer Space Treaty (Oct. 10).

Congress is still in the second week of recess, but the Space Foundation team remained active in engagement efforts by attending briefings on the Hill and met with staffers working on key space and education issues.

The Congressman remarked, “I want to thank the Space Foundation, YBI, and YSU for bringing this workshop to Youngstown. It’s a testament to our community’s success, creativity, and innovative spirit.”

Corey Patrick (Youngstown Business Incubator) said, “The Youngstown Business Incubator (YBI) is excited to partner with the Space Foundation on a program that hits so many of our targets: developing technology-based businesses, diversifying the supply chain, and engaging with university students. While this will be a great one-day event, we hope that this is the start of a long-term engagement between the Space Foundation, YBI, and our community.”

Shelli Brunswick (Space Foundation) and Alain Ouellet (Canadian Space Agency) both described the international collaboration between Canada and the United States in education and for the Gateway project, mentioning, “we could not ask for a better neighbor on Earth or partner in space.”

The Space Foundation team attended a breakfast to hear Brig. Gen. Doug Schiess, USAF, discuss the launch ranges of the future. Schiess mentioned that in 2020, the range expects 40 launches and he shared prospects of integrating new technologies, updating infrastructure, and publishing a scheduling system for launch providers to work together and optimize the launch rate.

The 45th Space Wing plans to support the polar launch of the SAOCOM-1B satellite on a SpaceX Falcon 9. This would be the first polar launch from Cape Canaveral AFB and will use a “dog-leg maneuver” to reach the proper orbit.

He also mentioned the Autonomous Flight Safety System (AFSS) as a technology upgrade and expressed the importance of launch safety through modernization.

Schlacter stated that SDA is trying to develop a future threat-based space architecture for the DOD. He said that it was analogous to collecting battleplans from across the military enterprise, collating them, and developing a space architecture that will satisfy these plans on a coordinated manner. SDA, he said, is like an orchestra conductor — it will synchronize other space actors (to include USAF, DARPA, and others), in addition to fielding an organic capability. 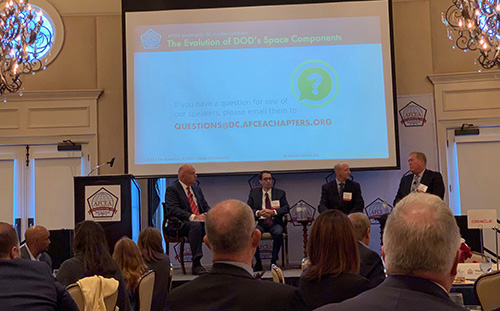 Kitay stated that we need to outthink the adversary and, “keep the oars rowing in the same direction.” He stressed that the strategic environment is at an inflection point for the space program. Two trends are driving this. First, our overarching reliance on space, both in our day-to-day lives and in military operations. Second, the dramatic expansion of counterspace threats.

An attendee asked which counterspace capabilities from Russian and China are most concerning. Kitay answered that threats are at an all-time high and expanding. In addition to ground-based threats, like kinetic ASATs, satellites face risks from directed energy weapons, cyberattacks, and on-orbit threats. On a macro level, it is the scope of the threat landscape that is most concerning, instead of any particular threat.

Schlacter emphasized that the average time to design and deploy a satellite is seven years. He said that we have to shorten that timeline in order to turn inside the adversary’s OODA loop (observe-orient-decide-act).

An attendee asked about the relationship between the Space Development Agency and a potential U.S. Space Force. Kitay said that SDA will go into Space Force, if one is established, at the proper time. Across the military, major components with a global space function will be moved in Space Force.

Space Force, he continued, will elevate space as a domain. The role of space will no longer be to just support terrestrial forces but will be a domain for competition and crisis unto itself.

Dragonfly is a rotorcraft lander that was selected in 2019 in response to NASA’s fourth New Frontiers call. The mission will investigate the surface of Titan, a moon of Saturn that has previously been visited by the Cassini mission and Huygens Probe.

Despite an average surface temperature of -180 degrees Celsius, Titan is an attractive candidate for life due to a dense nitrogen atmosphere and the presence of complex organic molecules. In this way, it is a close analog to primordial Earth. Dragonfly will probe Titan for signs of life with a sensor suite that includes a mass spectrometer, a gamma-ray and neutron spectrometer, and a seismometer.

Titan’s low gravity and dense atmosphere make flight more efficient than roving as a means of transport between sites of scientific interest. Dragonfly will be powered by a radioisotope thermoelectric generator, which in turn will charge large batteries during Titan’s night.

Dragonfly will use autonomous flight navigation software and a “leapfrog” strategy to identify safe landing sites before landing. Dragonfly is slated for launch in 2026, and will land on Titan in 2034 after a nine-year journey to the Saturnian system.

Educators: Apply by Jan. 10 for the 2020 Alan Shepard Technology in Education Award »